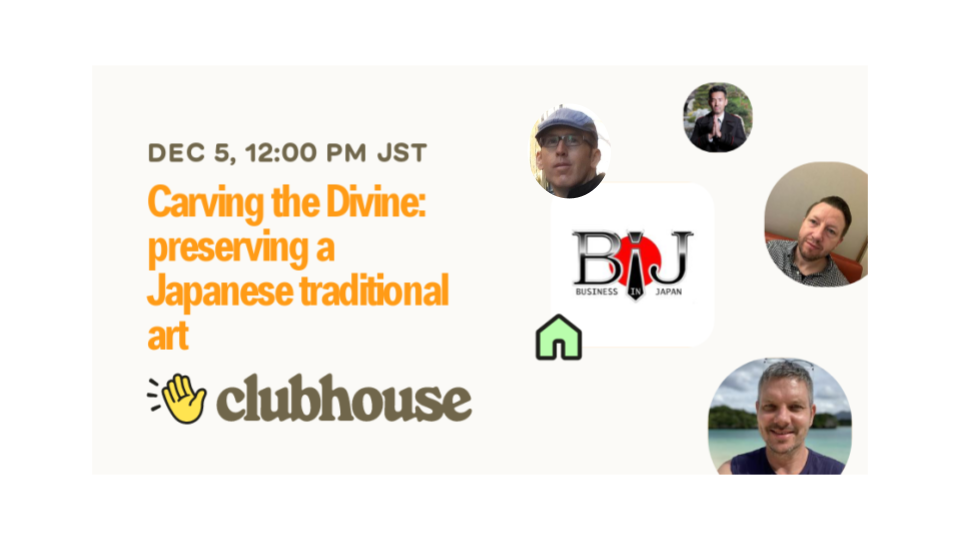 Get invited to future events

Free admission
Clubhouse is a 'Drop-in, Audio-only', smartphone app Social Media platform. Download it, create an account and you're in!

Have you heard of Butsuzō? Direct translation 'Japanese Buddhist statues', but it encompasses much more. Yujiro Seki discusses his 10yr documentary: Carving the Divine - Buddhist Sculptors of Japan.

Needless to say, Japan has had a long historical relationship with Buddhism. Buddhism first arrived in the 6th century and since then has principally co-existed in harmony alongside Japan’s original religion, Shintoism. From this combination emerged variations and interpretations of Buddhism that differ from other parts of the world.

In this unique environment, the Japanese developed an artistically profound Buddhist statuary culture and to this day you can see its legacy throughout the country.

At first, the styles of Japanese Buddhist sculptures closely resembled those of contemporary China and Korea, and the primary material used was bronze. But around the 11th century, due to Japan’s diplomatic break from China and the prominence of a legendary Busshi named Jocho, among other factors, Japanese Busshi began producing their own style, called Wayo, utilizing wood.

The great Buddha and Kongōrikishi of Todaiji Temple, the 1,001 statues of Kannon bodhisattvas at Sanjūsangen-dō, and the massive 11-Headed Kannon at Hasedera (featured in Carving the Divine) are all the work of busshi.

Beyond mere crafts, the sculptures created by busshi have a deep spiritual connection to the collective Japanese psyche. The movie explores the art and discipline of busshi but ultimately attempts to reveal the meaning of Butsuzo for the people of Japan and beyond.

Join us to explore more about this mysterious Japanese Buddhist art, Butsuzō today.

We hope to see you this Monday & any Monday lunchtime JST, for more casual discussions about Japan & Business/Work subjects, interesting speakers & panel guests.

Please share this block of text below with friends!

Have you heard of Butsuzō? Direct translation 'Japanese Buddhist statues', but it encompasses much more. Yujiro Seki discusses his 10yr documentary: Carving the Divine - Buddhist Sculptors of Japan.

Clubhouse is a smartphone only (though there is a 3rd party Computer app called Clubdeck too AFTER you have an account), Audio-only Social Media platform & 'Replays' are now possible! Check the BIJ Club Replays Tab, or at the bottom of speakers Profiles on Clubhouse. The Event links also redirect & play the event audio during & after it has finished, in any browser!

And if not yet registered for BIJ Events or this was forwarded to you, you can register here: BIJ on DOORKEEPER (https://businessinjapan.doorkeeper.jp/)

Growing out of a LinkedIn based group Founded in 2008, Business in Japan is the world's largest networking group for English-speaking professionals looking to do business in, with, and/or related t...